Oliver Schneller (Germany) was born 1966 in Cologne, grew up in Europe, Sudan and the Philippines. He completed his doctorate in composition with Tristan Murail in 2002. From 2002-2004 he was “compositeur en recherche” at IRCAM, Paris working with the Ensemble Intercontemporain. During his studies he received important impulses from Helmut Lachenmann, George Benjamin, Salvatore Sciarrino and Jonathan Harvey. The focus of Oliver Schneller’s compositional work lies in the creation of networks between musical instruments, architectural spaces, and live computer processing. He was a guest artist at ZKM Karlsruhe, at the Experimentalstudio des SWR Freiburg, and at the GRM Studios at Radio France.  His works have been conducted by Ilan Volkov, Jonathan Nott, Stefan Asbury, Peter Rundel, Titus Engel, Jonathan Stockhammer, Enno Poppe, Baldur Brönnimann, Pierre-André Valade, among others, and were presented at numerous international music festivals including Donaueschingen, Darmstadt, Warsaw Autum, Festival Présences Paris, Beijing Modern, MATA New York, Tanglewood, Aspen, the “Millenium Stage Series” at the Kennedy Center in Washington DC, Festival RésonancesWien Modern, Munich Biennale, Maerzmusik Berlin, Ultraschall Berlin.  Schneller has held residencies at Cincinnati Conservatory, Takefu Festival (Japan), Central Conservatory Beijing, ZKM Karlsruhe. He is the recipient of the Fromm Prize of Harvard University, four ASCAP Awards, and fellowships from the Ernst fon Siemens Music Foundation, the Tanglewood Music Center, Civitella Ranieri Foundation, Columbia University and the Rome Prize of the German Academy Villa Massimo.  From 2009-10 Schneller held a professorship in composition at the Conservatory of Music in Stuttgart. From 2012-2015 he was a professor of composition at Hannover Conservatory. In 2014 he was on the faculty of the Darmstadt International Summer Course in Composition, and in 2015 at the Beijing International Composition Workshop (BICW). Since 2019 holds a professorship at the Robert Schumann Conservatory in Düsseldorf, Germany. 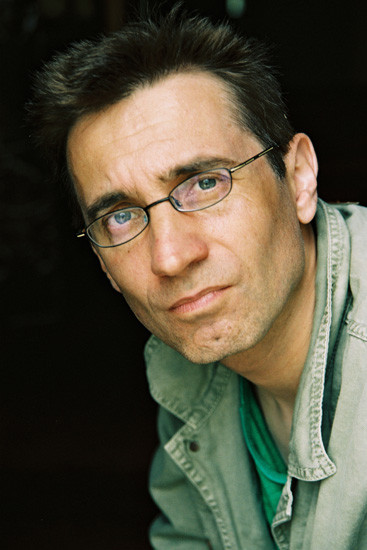 Mark Andre (France). Mark Andre, born in Paris in 1964, creates musical-existential experiences for the listener characterised by subtle, minutely worked-out processes of transformation. Central to his work is the question of disappearance, which shapes his approach to sound, form, and subject. The practicing Protestant is a sensitive explorer of sound, both in his delicate and concentrated chamber works as well as in his orchestral and music theatre pieces. After his studies in France, including those at the Paris Conservatory with Claude Ballif and Gérard Grisey, Mark Andre found a new musical home in Germany. He describes his encounter with the music of Helmut Lachenmann, whose piano concerto score Ausklang he happened to stumble across, as having been a revelation. He subsequently went through extensive composition studies with Lachenmann in Stuttgart and studied musical electronics with André Richard at the experimental studio of Southwest German Radio, in the meantime shifting the focus of his life from France to Germany. Here, he soon received grants and prizes, such as the Kranichsteiner Music Prize at the Darmstadt Summer Courses for New Music (1996), first prize at the Stuttgart International Composers Competition (1997), and the composition prize from Frankfurt Opera (2001). Since 1998 he has taught regularly at the Darmstadt Summer Courses. In 2002 he received the Advancement Award from the Ernst von Siemens Music Founda-tion, and in 2005 he travelled to Berlin as a participant of the DAAD Artists-in-Berlin Programme, where he has lived ever since. Particular interest was aroused by the 2004 premiere of Mark Andre’s tripartite music theatre work …22, 13… at the Munich Biennale. This work’s title refers to a passage in the Apocalypse of St John. His orchestral triptych …auf…, which he completed in 2007, similarly references religious themes. Here, Mark Andre explored aspects of transition as relates to Christ’s Resurrection. Andre has a soft spot for German prepositions, grammatical elements with the function of transition, as illustrated in numerous other work titles such as those of the chamber music works written between 2001 and 2005: …durch…, …zu…, …in…, and …als…. Mark Andre’s first opera, wunderzaichen, under Sylvain Cambreling’s baton, became a highlight of the 2013/14 Stuttgart Opera season and was reprised there in 2018 in a revised version. One of Mark Andre’s most important works of the last few years is the clarinet concerto über written for Jörg Widmann and the SWR Symphony Orchestra, which won the Orchestral Prize at the Donaueschingen Festival. His collaboration with Jörg Widmann has led to two further works for solo clarinet: Atemwind 1 and the sound installation …selig sind…. The violin concerto an was premiered in 2016 at the ACHT Brücken festival in Cologne, followed by the work …hin…for harp and chamber orchestra in 2018. Another significant work of recent years is the Riss trilogy for ensemble, with individual parts written for the Ensemble Modern, the Ensemble Musikfabrik and the Ensemble Intercontemporain. In the previous season, Drei Stücke für Ensemble were performed by the Berliner Philharmonie and the Elbphilharmonie, commissioned by the Berlin Scharoun Ensemble. Mark Andre kicked off the 2019/20 season with the world premiere of iv 17 at the Lucerne Festival. The eight miniatures for soprano and piano were then reprised at Wien Modern and at the ECLAT Festival in Stuttgart. As composer in residence, he guested at the Klangspuren Schwaz in September: the festival, which opened with the Austrian premiere of his orchestral work woher… wohin, featured an arrray of performances featuring his compositions. Shortly afterward, Ensemble Modern interpreted the cycle Riss in a concert showcase at the Shanghai New Music Week. With iv15 himmelfahrt, interpreted by Martin Lücker, an organ work was featured in the Alte Oper Frankfurt’s programme in September, whose premiere in October 2018 in Munich in a working version featuring electronic stop action was received to great acclaim, and was then was performed in June 2019 for the first time with mechanical stop action by Leo van Doeselaar in Bad Frankenhausen. The 2020/21 season was supposed to start with a repeat performance of Drei Stücke für Ensemble at Dresden Philharmonie through the Scharoun Ensemble. The last piece of this cycle which was planned for 2021 will be premiered in 2022 at Kunstfestspiele Herrenhausen by five of Hannover’s choirs and the Ensemble Modern. The season closes with the world premiere of a new work for harp and ensemble with the Ensemble Intercontemporain. Mark Andre is a member of the Berlin Academy of the Arts, Saxon Academy of the Arts, and the Bavarian Academy of the Arts, and was honoured with the order of Chevalier des Arts et des Lettres in 2011. In 2012 he was a fellow of the Institute for Advanced Study in Berlin. He teaches composition at the Academy of Music in Dresden. 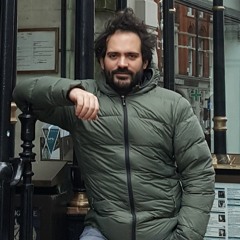 Blaise Ubaldini (Switzerland) is an original music personality. He is a musician with an eclectic background – a classically-trained clarinetist who also does improvisational music and rock – he rubs shoulders with some of the greatest soloists from all musical scenes, classical, contemporary, jazz, world-music, and creates unique and unexpected encounters around his work and those who collaborate with him. In the monodrama Bérénice, which was created at IRCAM in 2014, he explored with the Swiss actress, Caroline Imhof, and soloists from the Intercontemporain ensemble, an unprecedented osmosis between theater and music. He began composition with William Blank in Lausanne, then studied with Michael Jarrell and Luis Naón in Geneva and then Ircam in Paris for two years. During this time, he met conductor Pierre Bleuse, who conducted Blaise’s chamber opera 4.48, which won him the 2013 SACD New Talent Music Prize, and also worked with soprano Tatiana Probst, with whom he created Sunbathing for voice and electronics at Ircam. Blaise has a degree in Indian studies from the Faculty of Oriental Languages and Civilizations at the University of Paris. He does in-depth work on languages and voice, and expands his musical journey by writing texts to be part of the music as a literary element of his work. He collaborates with the ensemble Intercontemporain, the conductor Pierre Bleuse, the Collegium Novum Zürich, the Geneva Chamber Orchestra, the ensemble Accroche Note, the soprano Liz Pearse, the flutist Shanna Pranaitis, the Lucerne Festival Alumni Ensemble, the clarinetist Martin Adàmek, the Indiana University New Music Ensemble, the quartet Hélios, the vocal ensemble Exaudi, the company CH.AU, the ensemble Matka, the duo Interference. He is recording a new CD under Parisian label Paraty (distribution PIAS/Harmonia Mundi), to be out in spring 2022. 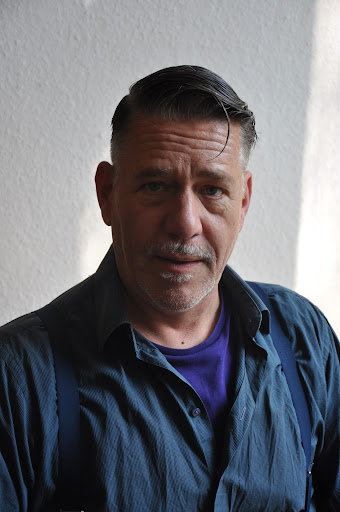 Rainer Rubbert (Germany) was born in Erlangen, Germany, in 1957, and he grew up in Berlin where he still lives and works. From 1975-1981 he studied composition with Prof. Witold Szalonek, at the Berlin School for the Arts (Hochschule der Künste Berlin). Herr Rubbert was significantly influenced by Prof. Szalonek’s radical style, with its distinctive resolution of the apparent contradiction between advanced musical material, compositional rigor and free expression. Herr Rubbert has received numerous prizes and fellowships, among others : Prix Marcel Josse 1979 ; the Cité des Arts Fellowship 1986/87 ; the Budapest Composition Prize 1989 ; the Musical Arts Prize of the Academy of the Arts 1992 ; the Villa-Serpentara Fellowship 2003 ; the Carl-von-Ossietzky Composition Prize 2007 and the Premio Città di Fossacesia 2012. Since 1989 he has been one of the artististic directors of the concert series Unerhörte Musik. In 2008 he wrote the Kleist Opera after a libretto by Tanja Langer. In 2013 he was awarded the German Composition (Musikautoren) Prize. 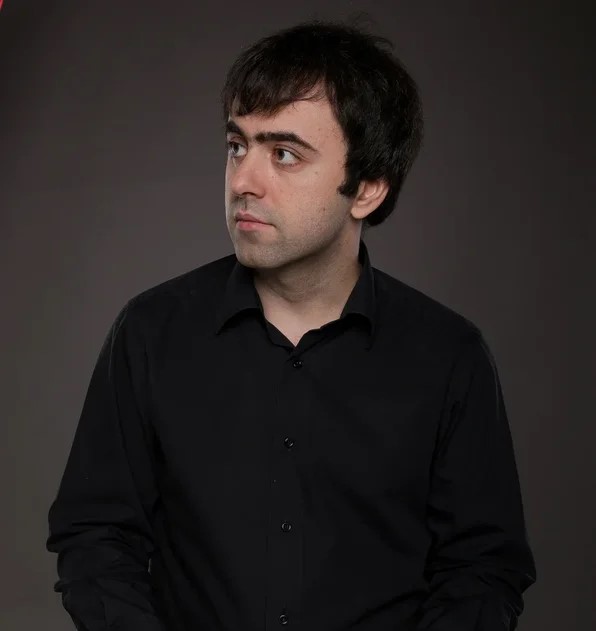 Mehdi Hosseini (Iran) was born in Tehran, Iran, and received his master’s degree and Doctor of Music degree (DMA) in Composition from Saint-Petersburg State Conservatory. His major teachers include Fahrad Fakhreddini, Prof. Alexander Minatsakanian, Prof. Nigel Osborne and Prof. Sergei Slonimsky in composition, and Professor Tatiana Bershadskaya in Musicology. His early musical experiences included from 1998–2001, where he studying music theory, Persian music and composition with Farhad Fakhreddini [4] in Tehran. Hosseini then entered the Saint Petersburg State Conservatory in 2001 where he under the guidance of Prof. Tatiana Bershadskaya studied musicology and composition with Prof. Mnatsakanian and continued postgraduate course with the composer Sergei Slonimsky. Mehdi Hosseini completed a composition course from the University of Music and Performing Arts in Vienna in 2007 during the summer courses at Muerzzuschlag, Austria where he studied with Nigel Osborne. Hosseini’s compositions include works for large orchestra, chamber orchestra, and various ensembles and has been performed and recorded by orchestras and ensembles such as the St. Petersburg State Philharmonic Symphony Orchestra, Symphony Orchestra of the Opera and Ballet Theatre of the St. Petersburg State Conservatory, North-Ossetian State Symphony Orchestra, Ensemble Intercontemporain, Namascae Lemanic Modern Ensemble, PluralEnsemble, Ensemble Proton Bern, Studio for New Music Ensemble, Moscow Contemporary Music Ensemble, GAMEnsemble and more. His works have been published by the Compozitor Publishing House (Russia), and the Donemus (Netherlands). In the last few years, He was the focus of attention in Russia as a composer and his works are performed during such festivals as St. Petersburg Musical Spring, Contemporary East and West, Contemporary Past, A Reverse Perspective, Trajectories of Petersburg Avant-Garde, Sound Ways, Moscow Autumn, Moscow Actual Music Festival “Another Space” and others. His music is played in Mariinsky Theater, Saint Petersburg and Moscow Conservatories, Saint Petersburg and Moscow Philharmonics. Mehdi Hosseini made an invaluable contribution to the development of the St. Petersburg cultural scene in 2011  when he opened the Saint Petersburg Contemporary Music Center “reMusik.org” and in 2013, he founded the St. Petersburg International New Music Festival.