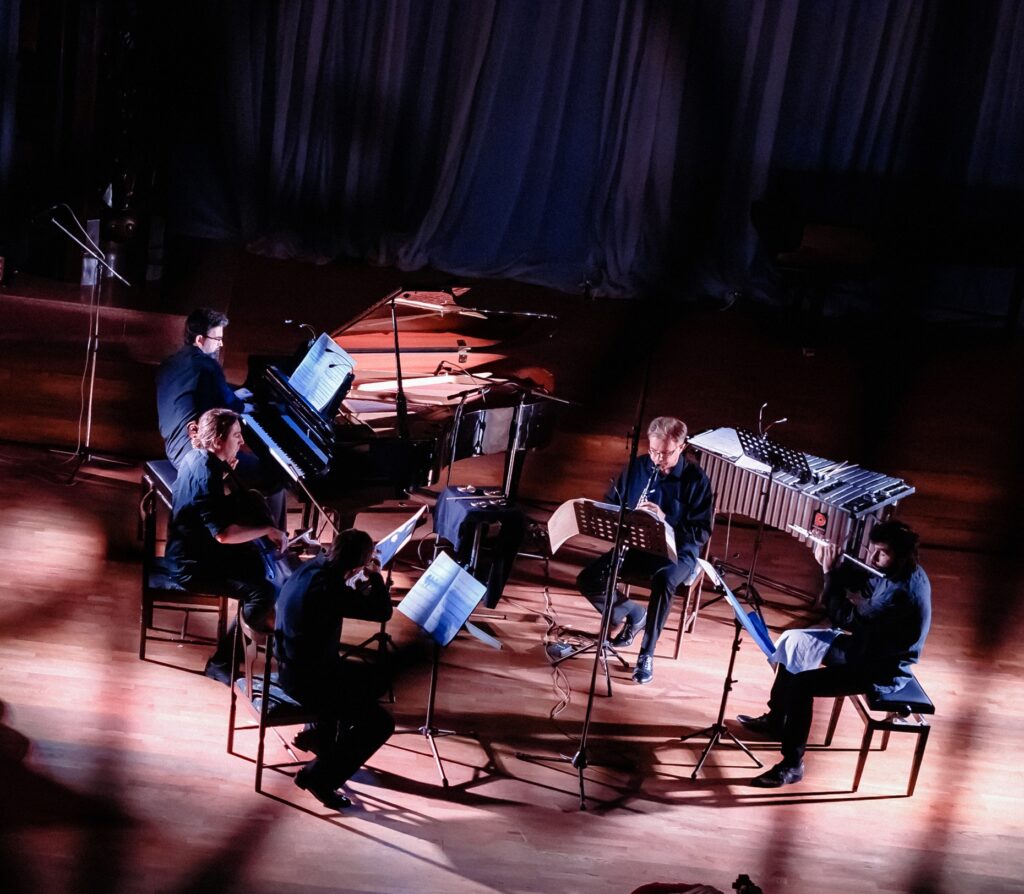 Moscow Contemporary Music Ensemble (MCME) was founded in 1990 by Yuri Kasparov under the patronage of the famous Russian composer Edison Denisov. The ensemble focuses on promoting 20th– and 21st-century music.  It is Russia’s foremost contemporary chamber ensemble and consists of some of the best Russian musicians specializing in modern music. MCME has strong educational goals and works closely with both Russian and international cultural foundations to bring contemporary music to a wide range of audiences.  As part of this goal, MCME organises the annual fortnight International Young Composers Academy (Tchaikovsky City, Ural) to bring together both young composers and internationally recognized composers in workshops. The ensemble’s repertoire is extensive and has included the premieres of almost 1000 different works.  MCME regularly performs in diverse locales across Russia (80 cities) and elsewhere in the world (28 countries). MCME has performed on the best concert stages, and taken part in some of the biggest international festivals such as “Moscow Biennale for Contemporary Art”, “DiaghilevFest” (Russia, Perm), “Radio-France presences” (Paris), “FrankfurtFest”, “Maerzmusik-Berlinerfesrspiele” (Germany), “Gaudeamus music week”, “The Night of the Unexpected” (the Netherlands), “Warsaw Autumn” (Poland), “Klangspuren” (Austria), and “Tranasrt” (Italy). MCME has recorded more than 50 CDs for leading CD labels, including Olympia (UK), Harmonia Mundi (France), Triton (Japan), Donemus (The Netherlands), and Fancymusic (Russia). In 2009 MCME won the award ACTION in support of theatrical initiatives, and were awarded the GOLDEN MASK in 2013. 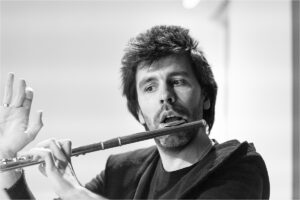 Ivan BUSHUEV (flute)
Ivan Bushuev was born in Moscow in 26.11.1984. In 2002 graduated from the M.M.Ippolitov – Ivanov music college (the flute class) with a golden medal. At the same year won the 1st prize at the young talents competition of M.M. Ippolitov – Ivanov. In 1999 won chamber music competition in Moscow (Russia). In 2002 he has got the 2nd prize in the “Baroque Accademie” competition (Gmunden, Austria). In 2007 graduated from the Moscow Tchaikovsky Conservatory, the Department of Historical and Contemporary Performance, in the class of Olga Ivusheikova (modern and baroque flute). He teaches at the Moscow Conservatory (Ensemble and XXth century music history). Took part in such festivals as “December nights”, “DiagilevFest”, “Moscow Autumn”, “Dedication to Oleg Kogan” (Russia), “Oude Muziek”, “Gaudeaumus Music Week” (the Netherlands), “Maerzmusik” (Germany), “Klangspuren” (Austria), etc. Organizes his own projects and concerts, one of which was held with success in Moscow Conservatory in October 2005, was dedicated to Japanese composer Toru Takemitsu and included 9 Russian premieres. Six years ago Ivan Bushuev and Natalia Cherkasova (piano) created the duo and in 2006 won the prize for best performance of modern Dutch piece on the contemporary chamber music competition (Poland, Krakov). In 2007 Ivan Bushuev won scholarship “Fondazione Marco Fodella” and studied in Scuola Civico di Milano in class of Marcello Gatti (baroque flute), and took the lessons in Conservatorio di Verdi in class of Claudio Santambrogio (modern flute). Soloist of Moscow Contemporary Music Ensemble since 2007. He also collaborates with baroque soloists orchestra «Pratum Integrum». In 2011, on “Caro Mitis” lable, in common with Olga Martinova (harpsichord) recorded 6 sonatas of Joseph Bodin de Boismortier for baroque flute and harpsichord. Collaborates with such composers and musicians as Beat Furrer, Tristan Murrai (France), Gerard Zinstag (Switzerland), Simone Fontanelli, Eva Furrer, Harrie Starreveld, Helen Bledsoe (Holland), Vladimir Tarnopolskiy, Mark Pekarskiy, Aleksei Lubimov (Russia) etc. Participated in master-classes given by Willbert Hazelzet, Jan de Winne, Cristian Gurtner, Benedek Csalog (baroque flute), A. Adorian, Allen Marion, Helen Bledsoe, Harrie Starreveld (modern flute). Appears on the stage as a soloist, ensemble and orchestral player in Russia and abroad. And gives a master classes both of modern and baroque flutes. 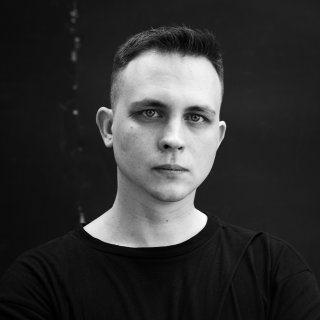 Ignat KRASIKOV (clarinet)
Ignat Krasikov was born in 1993 in Alapaevsk, Russia.
In 2012 he graduated with honors from the  at the Mussorgsky Ural State Conservatory Musical College ( in the class of professor Michail Morev ) In 2018 he graduated with honors from the Maimonides State Classical Academy ( in the class of Honoured Artist of the Russian Federation, professor Evgeny Petrov ). During his studies, Ignat became a prize-winner of numerous international competitions, among which are: XVIII All-Russian competition “Ural fanfare”; I prize (Magnitogorsk, 2010); -XVI international musical competition; II prize (Togliatti, 2011); International competition “Classical Academy” – Grand Prix (Moscow, 2016). Ignat performed with such famous conductors as Sergei Ferulev, Michail Katz, Anton Shaburov, Valentin Uryupin. He is the first Russian performer of “Harlequin” for clarinet solo by K. Stockhausen. He participates in classical and contemporary musical festivals among which are: «МОСТ» in Rostov-on-Don, Diaghilev festival, “Archstoyanie”, “Biomechanics”. Also Ignat became a well-known composer and his compositions are performed in the best concert halls in Moscow and in the other cities. From 2021 Ignat collaborates with MCME 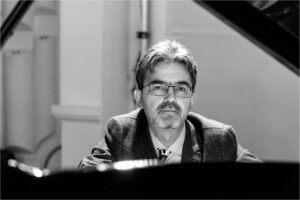 Mikhail DUBOV (piano, cembalo, organ) ­
Mikhail Dubov is a pianist and musicologist, a laureate of Seiler prize and Action premium. Graduated from the Moscow Tchaikovsky conservatory. Studied piano with prof. V. Gornostaeva, organ and cembalo with prof. A. Parshin. Defended Ph.D. thesis on Iannis Xenakis, now proceeding musical research. At present he is a professor of the Moscow conservatory (piano, ensemble and XXth century music history) and Ippolitov-Ivanov musical college, being there one of the founders of contemporary music chair. Mikhail Dubov became a member of the Moscow philharmonic ensemble “Old Music Academy” (leaded by Tatiana Grindenko) in 1992, where engaged in authentic performing of baroque masterpieces. Was invited for several programs by Jury Bashmet (“Moscow soloists”) and “Madrigal” ensemble. Since 1993 Mikhail Doubov is a soloist of the Moscow Contemporary Music Ensemble. As a soloists and chamber performer he played concerts and participated in festivals in many countries. He is the first performer of numerous works by Russian and foreign authors (up to the moment about 50 world premiers), including works by E. Denisov, D. Kurtag. Took part at dedicated concerts of I. Xenakis, H.-W. Henze, E. Denisov, T. Loevendie. Appeared at the most significant European new music festivals “Gaudeamus” (Amsterdam, 1995, 2001, 2003), “Warsaw autumn” (1997, 2004), “Maerzmusik” (Berlin, 2009) and others, at many of them as a constant participant. During a number of seasons have been performing series of XX century solo piano concert programs. Performed as soloist with well-known orchestras: “Ensemble Modern” from Frankfurt (cond. J. Nott), Moscow State academic symphony, St.-Petersburg Mariinsky orchestra (cond. J. Nozeda), Bolshoi TV and radio symphony, National Philharmonic Orchestra of Russia, including Russian premieres of piano concerto “Synaphai” by Xenakis and Concerto pour four soloists and orchestra by Messian at the Bolshoi Hall of the Moscow Conservatory with conductor Daniel Kawka. Mikhail Dubov participated in more than 40 CD recordings at different labels: “Melodija” (Russia), “Olympia” (Great Britain), Publishing House  “Le Chant du Monde” (France), “Meldac” (Japan), “Megadisk” (Belgium), “Russian disc” etc., mostly with XX century music. Published about 20 works in Russian editions on such topics as Varese, Xenakis, Schostakovich, Denisov. Participated in a number of international conferences concerning contemporary music.
Mikhail Dubov – professor of Moscow State Conservatory, a dean of the Historical and Contemporary Performing Faculty

Evgeny SUBBOTIN (violin)
Evgeny Subbotin is a violinist, violist, arranger, multiinstrumentalist. In 2005 he graduated with honors from the Moscow State Conservatory in the class of Professor A. B. Trostyansky. He is a laureate of International and all-Russian Violin Competitions, winner of the Rakhmaninov International Festival. In 2009 he organized the FX Quartet string quartet, the repertoire of which was based on the arrangements and author’s music of Eugeny. In the quartet he became the winner of the International Competition Usadba Jazz (2013) and the finalist of the TV project Quartet 4 * 4 on the State Russian channel “Culture” (2018). For 10 years he held the position of concertmaster of second violins group in the Russian National Philharmonic Orchestra. As a concertmaster he also collaborated with different orchestras such as “Musica Viva” (under Alexander Rudin), “Questa Musica”, “MusicAeterna” (under Theodor Currentzis), Moscow Symphony Orchestra, “Four Seasons”, participated at the leading music festivals such as “Diaghilev Festival”, “Moscow Autumn”, “Viola in my Life”, etc. He actively promotes contemporary music and since 2017 he constantly collaborates with the MCME as a soloist. His partners in chamber ensembles were Alexander Rudin, Alexander Trostyansky, Arkady Shilkloper, Grigory Krotenko, Petr Aidu, Sergei Poltavsky and other leading musicians. 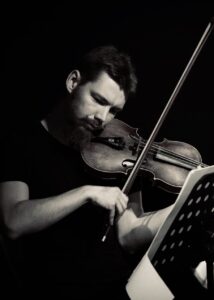 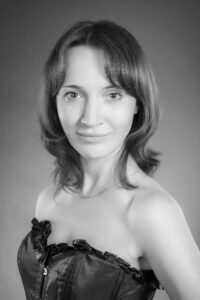 Yulia MIGUNOVA (cello)
Yulia Migunova was born in Nizhny Novgorod. She graduated from Nizhny Novgorod State Conservatory in 2009 (class of cello of Vishniewsky P. D.). As a member of various ensembles she took part in master classes with such artists as specialist of authentic performance Christoph Meier, winner of Yuri Bashmet International Viola Competition Daniil Grishin, «Vermeer-Quartet», «Jerusalem-quartet», «Debussy-quartet». Since 2006 she is a member of Cantando string quartet, with which she became a winner of numerous international competitions and festivals in Russia, Germany, France, Greece, Serbia. In 2011 the quartet won the I All-Russian Music Competition in Moscow. Since 2011 Yulia (both as soloist and as a member of different ensembles) becomes an active participant of contemporary music festivals collaborating with soloists and composers from Russia, Ukraine, Poland, France, Spain, Austria, Denmark, Italy, Germany and others. In 2008-2013 – artist of the Chamber Orchestra “Soloists of Nizhny Novgorod”, from 2013 – soloist of the Nizhny Novgorod Rostropovich Philharmonics Symphony Orchestra. Since 2015 she is actively cooperating with Moscow Contemporary Music Ensemble. 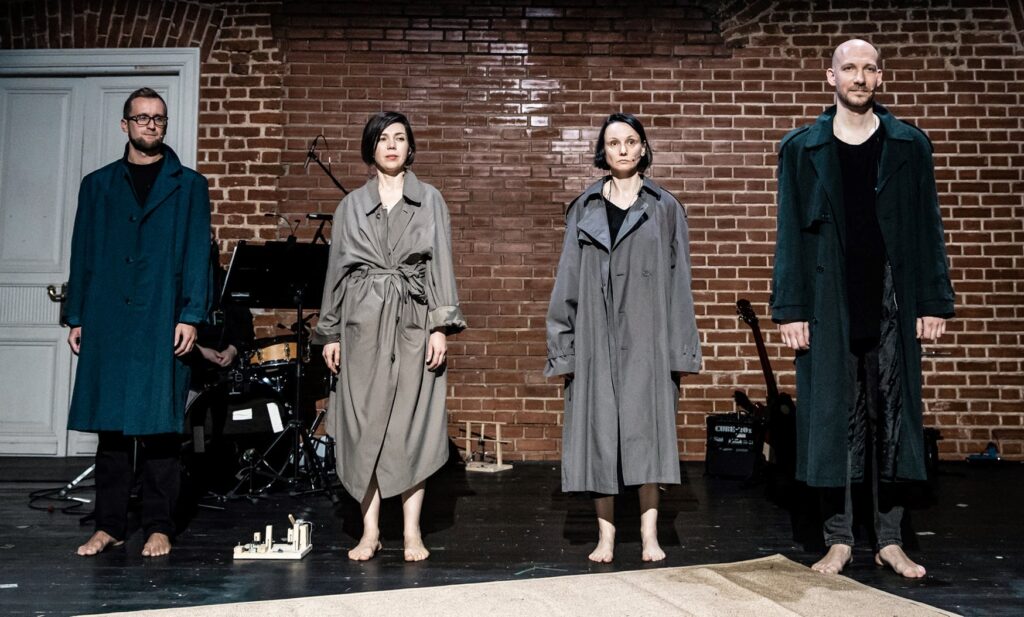 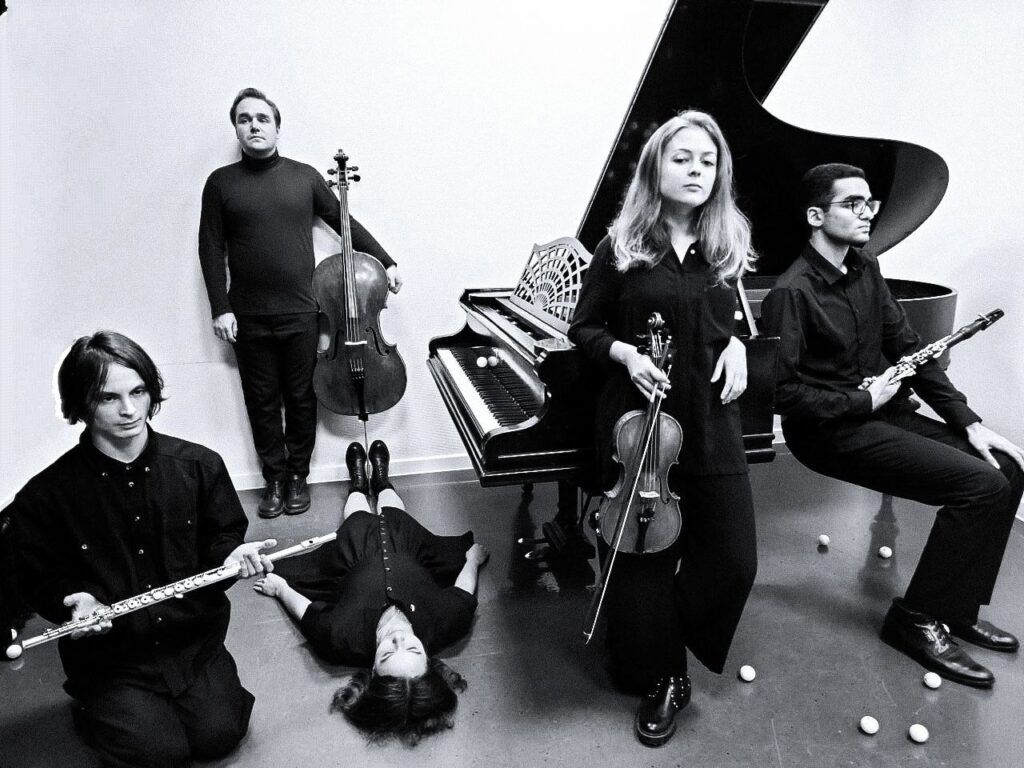 Just Ensemble is a young ensemble specializing in the performance of contemporary classical music. The ensemble was created in September 2021 at the initiative of young composers and performers. The musicians are students and graduates of the St. Petersburg Conservatory, who study contemporary performing arts. Just Ensemble performs at various venues in St. Petersburg such as the Sound Museum, the Blank club, the Composers Union and the Radio House. The ensemble performed at the international audiovisual festival “Epicentrum” and at the international festival of new music “Sound Ways”. The basic structure of Just Ensemble is a quintet: Anastasia Martynova – violin, Gevork Sarkisyants – clarinet, Ignat Khlobystin – flute, Alexandra Listova – piano, Dmitry Drobko – cello. At the same time, the composition can expand to a large ensemble and even a chamber orchestra

Moscow Conservatory’s Centre for Electroacoustic Music CEAMMC is focused on scientific research and creative work. It is an autonomous department within the Moscow State P. I. Tchaikovsky Conservatory. Main areas of the work include:
— the research of history and theory of electroacoustic music  in all its range of forms, based on national and international experience in that field
— development of tutorials and educational materials
— organisation of lectures, master-classes, concerts and festival events that involve the participation of  local and foreign composers, musicologists and performers.
CEAM takes active part in conservatory’s educational work and it acts as educational base for the learning of new technologies and creation and development of electroacoustic and multimedia projects.

Sergey PASHKEVICH (piano) was born in St. Petersburg, Russia in 1966. He studied piano with professor Pavel Egorov and Vladimir Shakin at the Conservatory. After completing his master’s degree, he went to the Sweelink conservatory in the Netherlands and studied with Professor Jan Wijn. Afer graduation, he has given numerous concerts throughout Europe and performed at least twice a year at the various podia in the Netherlands, where he has become a favorite and much admired and accomplished artist and musician. He has also participated in various music festivals, such as Spring Music Festival in Budapest, Hungary. He has worked such conductor as Ken Ichiro, Kobayashi, Jan Syulen, Edo De Waart, Golo Berg, Rashid Skuratov. In terms of personal honors, Pashkevich participated in the international competition in Morcone, Italy, in Budapest, Hungary, in the U.S.and the Rachmaninoﬀ International competition in Moscow. As an excellent Liszt interpreter, he won the First prize in the Third Liszt International Piano Competition held in Utrecht, the Netherlands in 1992, the First prize in Wroclaw, Poland and the “Best Interpretation Award for Liszt Hungarian Rhapsody” in the International Competition held in San Paolo, Brazil.